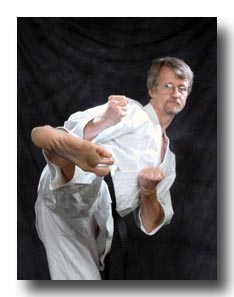 Joel Ertl is a 6th degree black belt, which he received in 2004 from Master Hidetaka Nishiyama. Sensei Ertl began his training in 1973 and has been teaching karate full time since 1976.

Sensei Ertl has been the chief instructor for Midwest Karate Association in St Paul since 1979. Before that time he was the Chief Instructor in St. Cloud, Minnesota from 1976 to 1979.

Sensei Ertl’s instructor is Sensei Robert Fusaro, the owner and Chief Instructor for all of Midwest Karate Association. Sensei Ertl takes part in the Instructor Training Program at the Minneapolis Dojo.

Sensei Ertl has many tournament accomplishments. He is the 1989 AAKF National Individual Men’s Kata champion. He was also a member of the Minnesota State Kumite (sparring) Team which was the AAKF National Champion in 1984.

Sensei Bendickson is a 5th degree black belt, which she received in 2007. She began her karate training in 1975. She has been a full time karate and self-defense instructor since 1979.

In addition to her teaching duties at the St Paul dojo, Sensei Bendickson also teaches numerous workshops and self-defense classes around the Twin Cities for various groups, schools and organization- including a self-defense class for the University of Minnesota and Macalester College.

Sensei Bendickson has twice been the AAKF National Womens Kumite Champion, first in 1984 and again in 1989. In 1983 she was a member of the USA karate team that competed in the ITKF World Tournament in Cairo Eygpt.

Meghan is a third degree black belt (Sandan). She is the daughter of Joel Ertl and Anita Bendickson.

Meghan began her karate studies at Midwest Karate Association at the age of 5, and received her first degree black belt at the age of 13. She received her nidan in 2010 and sandan in 2014. Her training experiences while growing up put her in a unique position as an instructor in our children and youth programs.

Sensei Joel Ertl and Sensei Anita Bendickson bring top level instruction in the art of traditional Japanese Shotokan Karate right into your living room. Learn what karate students from all over the world have discovered and start improving your karate today!

Active by Anita on Etsy!

We are a participant in the Amazon Services LLC Associates Program, an affiliate advertising program designed to provide a means for us to earn fees by linking to Amazon.com and affiliated sites.